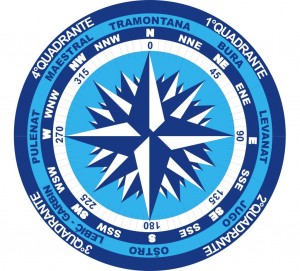 Bora – 1st quadrant wind (burin is similar to bora, but is of local character since it is defined by the temperature difference between the land and the sea). The strength and the direction of bora depend on the characteristics of the land, it may bring high pressure (vedra bura) or low pressure (skura bura). The high-pressure bora occurs when the South-eastern Europe is under influence of a high-pressure field, while low-pressure filed influences the central Mediterranean area. It brings lower temperatures and clear skies, and may last for several days (it is usually stronger toward the end of the day and weaker during the day).

Scirocco – is humid 2nd quadrant wind. It blows in the front part of the cyclone vortex. Depending on the formation location, scirocco may be brought on by high or low pressure.

Low-pressure scirocco – is formed when Atlantic low-pressure field is approaching the Adriatic from the direction of Pyrenees or Africa, or when there’s a Genoa cyclone forming above the Thyrrenian Sea. Scirocco may reach storm strenght and bring clouds and rain. It usually begins forming in the Northern Adriatic.

High-pressure scirocco – is formed while a low-pressure vortex is crossing the Western European area and there’s a high-pressure area above Mediterranean Sea. It is usually not strong, brings few clouds and does not bring rain.

Ostro – a southern wind common in the open seas, announces an approaching high-pressure field from NW or W. It is not influenced by land configuration.

Libeccio – a SW wind formed by the Azores High ridge south of Adriatic. Its duration depends on the speed of the anticyclone itself and can last for several days and form big waves. In summer months libeccio can reach storm strength.

Mistral – a summer wind formed by stable Azores high. It usually starts blowing around 11 o’clock and its usually stronger during the day and weakens toward the end of the day. Its direction changes accordingly to the rise of the land temperature (it “follows” the sun). Mistral brings fair weather. In the open sea it is a constant 4th quadrant wind with slight oscillation toward N.

Tramontane – a 4th quadrant wind that bloes with NW fronts. It can be very strong and stormy.

Levante – an eastern wind close to bora and scirocco.

Some signs of the (continuing) fair weather – fair skies with only few cirrus clouds moving slowly or not at all. Burin possible in the sunrise and sunset, mistral during the day. Other signs of good weather ahead are clear sunsets and regular ebb and flow periods.