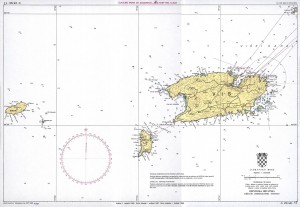 We could say that island Vis is true paradise for sailing fans. It is most western island in Dalmatian archipelago with a surface of 90.3 square kilometres. Its biggest width is 8 kilometres, and in direction east-west it is long 17 kilometres. From the distance it looks like one mountain with highest peek of 587 meters (Hum). When you get close to island numerous bays and coves open in front of your eyes with beautiful beaches and rich vegetation of pine trees, olive trees and vineyards. Vis shores along with its small islands, rocks and cliffs are truly unique pearls of Adriatic sea which offer many possibilities and pleasures for sailors and sport fishermen. Most of people come to Vis from island Hvar, after they and visit sail from Split and Visit island Brac and Hvar. Betweeen Hvar and Vis there is Vis channel in which is usually wavy, especially if strong jugo blows from the south. During summer months in this channel blows quite strong maestral so it is advisable to prepare your boat and sailing route according to winds. Vis channel is 6 nautical miles wide. Winds around island Vis when it is nice weather usually blows from direction of sun, so it is good to start island tour from east.

From cape Stoncica to sea rock Plocica coast is steep and rocky, while after Plocica to cape Polivalo it is accessible with few nice coves suitable for anchoring.

0.4 miles south of cape Stoncica you can find coves Smokova mala and Smokova velika (small Smokova and big smokova). They are look a like, and they are facing north-east which mean that they provide good shelter from western winds. Between these two coves, 0.1 miles from shore, stands sea rock Plocica. Half mile south-west from Vela Smokova cape there is 600 meters long and very narrow little island called Greben. East coast of this island is steep, but other side is shallow and suitable for docking along the shore.

More on the south there are two sea rocks around which there are many underwater rock and this part is dangerous for sailing so try to avoid it in a bigger circle.

Between island Vis and sea rock Pupak sea depth is only 3 meters so ships with bigger draught must count on it.

More on south there are little islands Parzan veliki and Parzan mali, Budikovac veliki and Budikovac mali, and Ravnik. All of them are surrounded by shallow water and underwater rocks so sailing in that area can be dangerous if you don’t know where to go.

When you sail in direction of sea rock Zaglav you need to watch for sea rock Plocica which is in time of high tide in the seal level, while if there are waves it is really hard to see it. South west from little island Parzan veliki is one more sea rock, and 0.2 miles south shallow water with two rocks.

In the case of unexpected bura (north wind) it is good to take a shelter in cove Milna in which you have a small dock for boats with smaller draught.

In the cove Zaglav there is sandy beach and next to the shore sea is very shallow so staying is possible only by anchorage. Cove is protected only from west winds.

To safest cove on east side of island Vis – cove and little village Rukavac – it is less then 1 mile sailing along the coast which is beautiful and suitable for anchorage and enjoying in sea, swimming or diving. Cove Rukavac is protected from east and south winds by long cape Polivalo and little island Ravnik. When east and south winds blows it is good to take a cover in the lee of island Ravnik. Cove Rukavac divide itself into two smaller coves by concrete peer. Docking is possible only on top of the peer and only for boats with draught up to 2.5 meters.

Sailing further along the island Vis coast in direction west, 0.6 miles from cape Polivalo, you will find cove Srebarna with sandy sea bottom, and pebbly beach at its end. This cove is very popular for swimming and enjoying the sun and nature. South-east part of this cove can serve as cover from south wind and it is also protected from winds of first and fourth quadrant.

Next to cove Srebarna there is another similar cove called Ruda, but this one is totally opened to south winds and at first sign of jugo you need to find a safer shelter. One mile west there are two similar coves Travna velika and Travna mala. Both of them have pebbly beaches and they are opened to south winds. In Travna velika there is small peer on which boats with smaller draught (1.5 m) can be docked. In Travna mala there is small restaurant that offers only organic food and drinks from island Vis, mostly fish, vines and many types of domestic hard liquor called rakija.

To cape Stupisce you can find dozen more or less similar coves but each with its uniqueness is worth of visit. From cape Stupisce to cape Krizni rat lies bay Komiza with a little fisherman’s town of the same name. Komiza harbour is protected from south and west winds by long peer along which the sea is deep from 6 meters at the head to 2 meters at the bottom of the peer. In extenson of peer there is stone seafront but it is usually occupied by small local boats. There are several maintained mooring posts in harbour. Strong west and nort-west winds in east part of port causes big waves and in whole port harbour swell. In Komiza you can find maritime museum, branch office of Harbour Master’s Office Split, several stores, ambulance, pharmacy, post office and bus station with connections to town Vis. Catamaran line is also available, and boat connection with small island Bisevo which lies 4 miles in front of Komiza port. Bisevo is most famous by its blue cave, wonder of nature and popular place to visit for many sailors and tourists. Bisevo is oasis of peace and untouched nature with only few inhabitants living on it.

North part of island Vis, from little islands Barjak veliki and Barjak mali to cape Nova posta (Cro: New post office) is less indented. Shore is steep and rocky and sea is very deep. In the cove Gradac there are three smaller coves with nice beaches, and in depending of wind direction you can find safe shelter from all winds in them.

Vis port is situated in spacious, 1 mile deep bay which is open from north-east. In Vis harbour north wind bura blows directly and it can be very strong making big waves. East part of bay is exposed to north-west winds, so when you choose a place to dock check weather conditions for that day. Zou can also dock your boat in the part of Vis bay known as Ceska vila, on east side of bay, and in old part of town Vis which is called Kut (once was different town). In town Vis you can find branch office of Harbour Master’s Office Split, police station, post office, ambulance, pharmacy, several stores and gas station. Vis has ferry connection to Split and bus connection to Komiza.