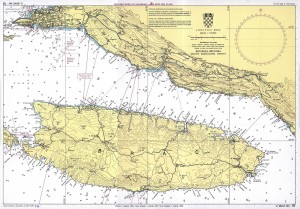 If you start your sailing tour or boat vacations in Split there are three directions in which you can go. One is north-west in direction of National park Kornati, second is south-east in direction of Dubrovnik and third is south in direction of islands Brac, Hvar and Vis. For most nautical tourist the first port after Split is on island Brac, and to be more precise in small place called Milna. Milna is situated on the western side of island Brac and it is popular nautical destination in which you can find ACI marina Milna. Western side of island Brac looks on island Solta from which is separated by ″Splitska vrata″ passage. Coast is very indented and it is not problem to find safe spot fo anchorage.

Popular place for staying overnight or during day is cove Bobovisca, little north from town Milna. Cove Bobovisca goes one mile inland and in its end splits into two branches. In south-eastern branch there is small old village around which there are few newly built vacation houses. Around the entire cove there is possibility for docking boats with a smaller draught. Boats with bigger draught can be tied at the beginning of south-east part on which the depth is around 2 meters. Cove Bobovisca is very well protected from all winds but if it blows from south-west, there can be strong harbour swell.

For those which prefer little safer overnight, only 3 miles away lies Milna. Town have built seafront around whole bay with different depths of sea. In south-east part of bay there is ACI marina. Milna harbour is very well protected from all winds but north-west wind can cause unpleasant harbour swell. In Milna you can find branch office of Harbour Master’s Office Split, gas station, little shipyard, post office, pharmacy, ambulance, police station, all kinds of stores for supplies and bus station to biggest town on island – Supetar.

Heading towards south there are several little coves with nice beaches, and pine forest extend to the sea. South-west coast of island Brac, from cape Kobila to famous beach Zlatni rat in town Bol, is most indented part of the island. Dozen of first coves goes deeply into island, and almost all of them offers safe and beautiful place for anchorage. From cape Kobila, behind which is dangerous shallow water for boats with bigger draught, 1 mile east is first cove called Osibova. Osibova provides good shelter from winds of first and forth quadrant, it has sandy bottom and anchor holds well. Further on south-east there is most ramified cove in this part of island – cove Lucice. Inside of this cove there are 6 smaller coves which offers safe shelter from all winds. In cove Lucice there are few vacaton houses, and beauty of this place can makes more then few tourist to stay here for several days.

Coves Maslinova and Velika Graska have nice pebbly beaches and thy offer good shelter from winds of first and forth quadrant (bura, tramontana and maestral).

In the cove Smrka there is abandoned military tunnel by which there is a little dock, and this is surely best choice for shelter of any winds and waves, especially for smaller boats which can sail into tunnel.

In the cove Blaca there is beautiful pebbly beach, and small chapel next to it. From this cove there is road to the famous desert Blaca on the island inland. Between cove Blaca and town Bol, along 5 miles of shore, there are not any more deeper coves, but there are several beautiful beaches wich are safe only during good weather.

Harbour Bol is guarded by two breakwaters. East one is bigger (130 m) and other have only 30 meters. Depths of sea on the bigger breakwater are from 1.5 to 3.5 meters. Seashore between two breakwaters is usually occupied by small boats of locals. Bol as a town I most famous for its Zlatni rat beach, and it is one of popular tourist centres in Croatia. There you can find branch office of Harbour Master’s Office Split, ambulance, pharmacy, post office, police station and many stores. Bol is connected with Supetar with a bus line and during summer months even directly to Split with catamaran line.

North part of island Brac is not so popular for sailing as it is not open to the sea but looks into the mainland. Never the less there are few nice little towns worth seeing there, and some beautiful beaches. West part of north side of island Brac, from cape Gomilica to town Postira is mostly low on land ans shallow in the sea part. Vineyards, cultivated fields and pine forest reaches almost to sea shore. On this side of island there is biggest town on island – Supetar. Harbour Supetar have two parts: new and old. New part of harbour is really ferry port and it has 260 meters long ferry peer which protects harbour from northern, and north-east winds (bura I lebanat). In this part of harbour there is almost always place to safely dock your boat. In the old part of harbour there is 100 meters long peer which from the north side serves for docking ferries. Depths from the south part of that peer are from 6 to 1 meters. Little more south there is another peer. In the bottom of old part of harbour locals dock their small fisherman boats. Supetar is safe harbour from all winds. In the town you can find branch office of Harbour Master’s Office Split, many stores, ambulance, pharmacy, police station, post office, ferry port, bank and gas station (not on sea).

West from Supetar there are several nice sandy beaches, and small town Sutivan which is 2 NM from Supetar. Sutivan have two breakwaters which protect its harbour from north and north-east winds. Strong north-west wind (tramontana) causes strong harbour swell.

From there to most north-western cape of island Brac – cape Gomilica, there is one more lovely cove called Livka. This cove provide good shelter from all winds except from bura and tramontana (north and north-west).

If you go from Supetar in direction east first town is Postira, which is famous for its fish processing factory, but not good as safe harbour. Further east there si town Pucisca in the cove of same name. Cove Pucisca goes one mile into land and at the end forks into two parts. West is Puciski dolac and east is Stipanska luka. Town Pucisca is famous for stone processing, and whole town is built from white stone from island Brac (same one from which White House is built). In Puciski dolac cove there is stone waterside protected by two smaller breakwaters. Depth of sea in this part is 2 meters. In Stipanska luka cove can dock boats with smaller draught. In town Pucisce you can find post office, few stores, ambulance, pharmacy and bus connection to other places on island.

More on south there is town Povlja which is last town on that side of the island. Povlja are safe harbour with its three coves, and can provide shelter from all winds.

Island Brac have many little coves, and beaches worth seeing and inland of island also offer many interesting spots (highest peek of all Croatian islands) so don’t hesitate to explore it better.