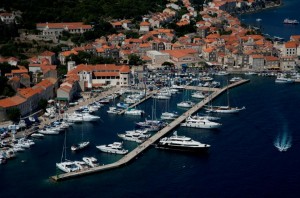 Korcula is very popular island for vacations, and town Korcula (same name as island) is surly most impressive place on island. It is called small Dubrovnik because of its walls which go around old part of the city. Some says that it is birth place of famous adventurer Marco Polo, and there is even little museum in one house where he allegedly was born. Old town looks very impressive with its narrow stone streets filled with restaurants, bars, and vibrant Mediterranean living. Korcula is also very famous for sailing in Korcula channel in which summer wind Maestral constantly blows, so it is not strange to see many wind surfers in it. One of places worth visited is small island Badija, just across town Korcula on which there is Franciscan monastery and church which dates from 14th century. Badija is largest island in Korcula archipelago and it is 20 minutes boat ride from Korcula harbor. It is covered with dense pine wood and cypress trees, and it is popular place for swimming for locals. Only few miles from Korcula in south-eastern direction there are famous sandy beaches Vela Przina and Bili Zal in vicinity of small village Lumbarda.

While in Krcula during summer season don’t miss presentation of traditional folk dance called Moreska. It is one of most impressive customs of this town. 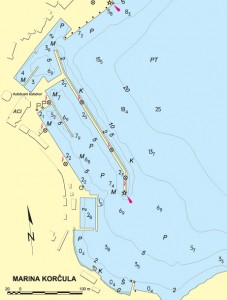 ACI marina Korcula is located on the north part of island Korcula east of the old town of Korcula in a small cove. It is protected from south winds by the island and from north by the breakwater.

ACI marina Korcula is open trough out the whole year.
It has 159 berths and 16 boat places on land. All berths have water and power supply.
Other facilities includes: reception, toilets and showers with hot water, exchange office, laundry service, restaurant, supermarket in near vicinity, parking lot, repair shop, 10 t crane.
The gas station is half of mile east from the marina, by the ferry peer.
The marina also offers accommodation on land in 13 apartments and 4 rooms.
ACI marina Korcula is one of marinas on Adriatic that have ″European Blue Flag″ for high environmental standards and clear sea.

Korcula is connected with mainland by ferry and catamaran lines. From Korcula you can take boat to town Orebic on peninsula Peljesac, and catamaran to city Split. There are also ferry lines to Split, Dubrovnik, Rijeka and Italian cities Ancona, Pescara and Bari. Possible airports are in Dubrovnik and Split. Ferry connection is also possible from town Vela luka which is also situated on island of Korcula, 40 kilometers east of town Korcula.