Opatija not only offer the elegance and romantic spirit of old times, but it is the one of rare cities that did not change its purpose over the years. Town become what it is because pleasure of vacation, and for that purpose it still stands today, as one of the Croatian tourist landmarks. Small fisherman village with benedictine abbey and church of St. Jakov, which are mentioned in 1499., almost over night becomes famous tourist destination. For its tourist history most important is name of Rijeka nobleman Ignio Scarpa who built his summer house in Opatija, and name it by his wife Angelina. Numerous guests were coming to his villa and step by step Opatija has become famous place for gathering of prominent people of that time. Soon, construction of numerous hotels and guest houses started. Most famous and oldest still standing is Hotel Kvarner which is built in 1884.

Opatija is famous by its mild climate which is pleasant trough out whole year. In the year 1907. Opatija took second place among 243 health resorts of Austrian monarchy, just behind Karlovih Vary. She was visited by numerous kings and artists of that time who enjoyed in it. Today’s visitors will be amazed by its villas and parks which are filled with plants from all over the world, and its 12 kilometers long promenade.

Little place Icici which is home of  ACI marina Opatijais also part of Opatija riviera, and it is famous fort its clear sea and lush greenery. For those who prefer to take a little trip on the continet Icici is at the foot of mountain Ucka (1396 m) which is one of Croatian nature parks, and desirable destination for tracking excursions. 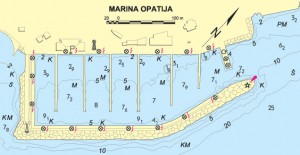 ACI marina Opatija is located in north-east Adriatic, in north-west part of city Rijeka bay, between Opatija and Lovran in a little village called Icici.

It is open trough out whole year.

BERTHS: 302 berths and 35 places for boats on land. Water and power supply is available for all berths.

Opatija can be easily reached from any European destinations by car. Closest airport is Rijeka airport situated on island Krk (only 40 km). Pula airport is 100 km away, and the one in Croatian capital Zagreb 180 km. There is also possibility to use Slovenian airport in Ljubljana which is 139 km away from Opatija. From Opatija and Icici there are regular bus connections to city of Rijeka which is regional center and 3rd biggest city in Croatia.